The German production company Caligari Film has packaged PAN TAU, a 14 x 30 min high-end live-action family entertainment series. The series was filmed in English with over 50 British actors. PAN TAU is a co-production by Caligari Film and ARD.

British comedy magician Matt Edwards (Grand Finalist at Britain’s Got Talent 2017) plays the title character PAN TAU. PAN TAU is a being from another world, he does not speak, but communicates through empathy, action and his magical powers. His new home is a high school and rumors have it that the doll on display in the entrance hall can come to life and help teenagers solve their problems. But PAN TAU has a naive understanding of our world and its magic mostly creates increasing chaos among teenagers and their families. 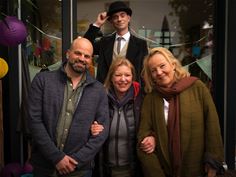 “We had no idea what the new PAN TAU would look like and the cast list was very long,” says Executive Producer Gabriele Walther. “But when we came across Matt Edwards, he was the one.”

Leading actor Matt Edwards on his role: “The story is such a breath of fresh air. PAN TAU lives in the now! (…). He just feels the atmosphere of the moment and a lot of people strive to be that way. “

The series was developed by producers Gabriele Walther, Marcus Hamann and director Franziska Meyer Price together with a team of British authors. PAN TAU (Czech for “Mr. Tau”) is based on an original character created in the early 1970s by the Czech writers and directors Ota Hofman and Jindřich Polák.

Caligari is the first German production house to produce a series in English with an entirely British cast that was shot in Germany. The shooting took place in Germany and actors like Niamh McGrady (“The Fall”), Olivia Caffrey (“Oliver Twist”), Jan Anderson (“Prison Break”), Orlando Seale (“Pride and Prejudice”), Jack Kane (” The A List ”), Jasmin Jobson (“ Top Boy ”), Jacob Avery (“ Dark Heart ”) and many others took on roles in the series.

About Caligari Film:
Caligari was founded in 1986 by Gabriele M. Walther and is one of the leading independent production companies in Germany. The focus of the Munich production house is on the creation of outstanding programs in the genres of family entertainment, sitcom series and animation.

’90 Day Fiancé’: Ariela Questions Whether Her Relationship With Biniyam ‘Will Survive’