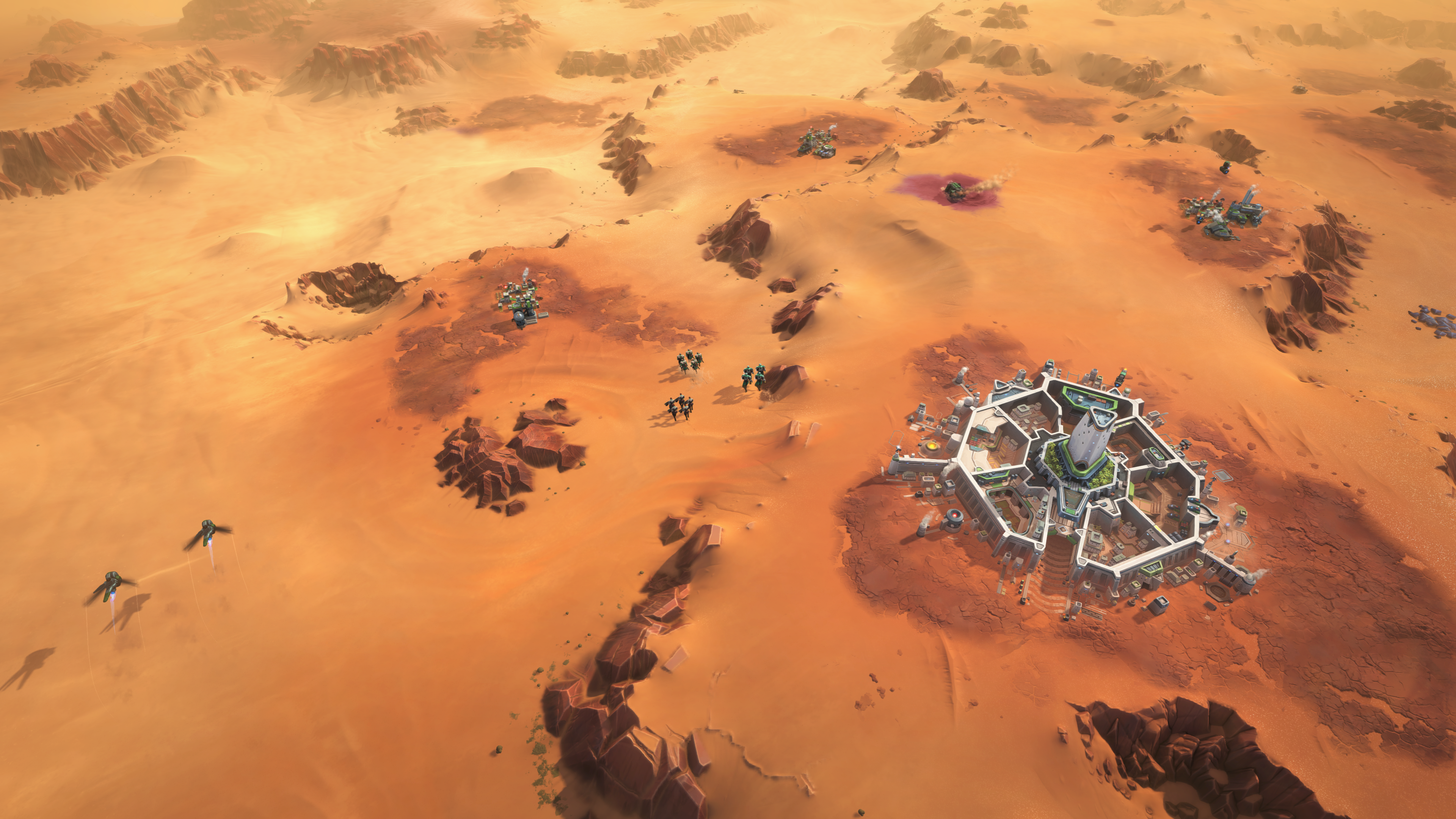 The breakneck competition, politics, and warfare in Frank Herbert’s Dune novels are a perfect fit for strategy games, and Northgard developers Shiro Games are looking to capitalize on this with their upcoming RTS / 4X, Dune: Spice Wars. Spice Wars will hit Early Access next year and use cunning, military might and careful resource management to get us to control Arrakis as a number of different factions that represent the Big Houses and other important groups in the area.

The action takes place on a circular map depicting the North Pole of Arrakis and we have the option to roll up a random version or use an “official” configuration that is very faithful to the description in the books. Although the whole planet is of course a large desert, the developers went out of their way to make sure that not everything feels like one large, homogeneous sandbox. They even consulted a geologist to try and find enough visually and mechanically distinct types of dry terrain to keep things interesting.

Rocky areas are valuable as they offer some safety from the worms. Deep Deserts are the opposite: they act almost like seas in a Civilization game, and just venturing into them is suicidally dangerous until you unlock later techs. All military units are limited by supplies that can be depleted very quickly in unyielding environments. And of course, the worms are a ubiquitous threat as all of your units create vibrations that attract them. If one shows up, your only option is usually to evacuate the area until it disappears.

The ruler of Dune can be achieved in three ways: you can completely crush all your rivals, be made governor through political maneuvers, or achieve a point-based hegemony victory that can vary from faction to faction. The two factions revealed so far are House Atreides and House Harkonnen. True to its lore, the former has more options for diplomacy and indirect control, while the latter focuses on brutal military supremacy.

The choice of house isn’t the end of the story either, as you also choose a small number of consulates for each new campaign. These sub-leaders come from the characters in your faction and can further customize your play style. For example, Lady Jessica is a skilled politician, while Duncan Idaho takes advantage of her military.

Spices will of course be the main resource and the main way of getting money. The price will fluctuate over time and you always have to decide how much to sell and how much to store to take advantage of it. At launch there won’t be a full supply and demand system so you can’t flood the market to suddenly drop the price or hoard your stocks to keep them high, but developers are interested in getting this type of system take a closer look at the first early access version later. Also, you always owe the Emperor a small spice tax, which has dire consequences if you don’t pay it.

The Emperor is not the only political power in the galaxy, however, and interaction with the Landsraad, a ruling council of powerful houses, will also bring its own challenges and opportunities. This is your main link to the bigger game beyond Arrakis, where you can vote on resolutions to help yourself and / or hinder your enemies. If you play your cards right you can make a profit by being named governor of Arrakis. And not all maneuvers are done outdoors.

Espionage will also be an important system, although you can choose to specialize in it a lot or barely touch it. The ideal Shiro sees for these shadow games is to reward players who can correctly predict what their enemies will do. For example, your agents could launch an operation to seriously obstruct an oncoming enemy army if you know the route of attack they want to pursue. You should feel smart reading the board and letting the enemy play into your hands like a chess master, rather than just being rewarded for the haphazard use of spies.

Meanwhile, we’ll come across side stories that can be anything from a one-off event involving the recovery of a fallen ornithopter to a multi-stage event embroiled in a political deception. The developers strive for a balance between the natural storytelling that comes from the AI ​​Baron Harkonnen you play against, well … who acts like Baron Harkonnen, and more handcrafted mini-stories like this one. They cited Stellaris as a point of comparison, although each campaign should only last a few hours as opposed to dozen.

We’ll be able to pack our bags and head to Arrakis when Dune: Spice Wars hits Early Access sometime in 2022.

Leana Hafer is a freelance writer for IGN